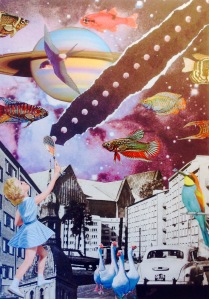 Bettie serveert refers to famous Dutch female tennis player Bettie Stöve. It is also the name of the Dutch indie rock band Bettie Serveert (Bettie serves or service to Bettie). They named themselves after Bettie who made it to the finals in Wimbledon but was more popular as a double player.
It is the last one in a series of three I made in the Nagymezö Utca in Budapest. Actually, on the day the Hungarian football team won over Austria with 2-0 at the European Championship in France.

Tinker Bell is from a Disney book from the fifties or sixties. With other images from various other vintage books about astronomy or medicine or for children. 19x27cm/8x11inch. 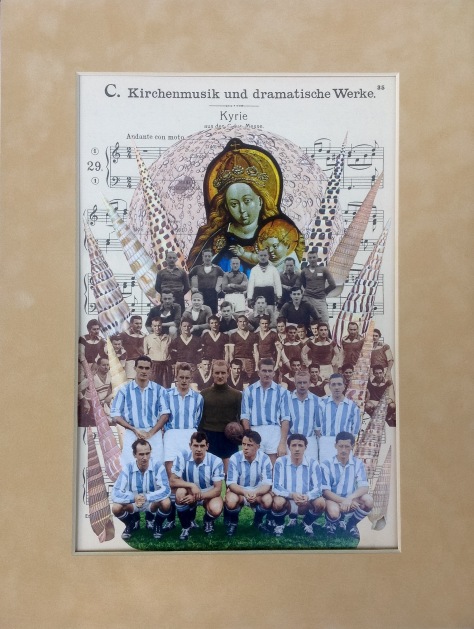 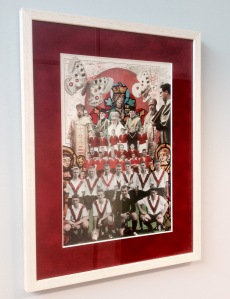 In general I work on 19x27cm and afterwards I cover the image with a passe-partout size 30x40cm (12x16inch). The handmade collage is framed in a wooden frame. It’s always hard to make a picture because of the glass. This was the best I could do.

Assemblage (27x17x13cm). Wooden box covered with pages of a fifties magazine and painted with a glossy varnish. With original books and various electric parts.

Handmade collage. 20x30cm|8x12inch. With central a ’49 Ford from a Saturday Evening Post from that year. All other images are authentic. Will come in a red passe-partout with a wooden frame.