Henkie’s corner open September, October and November in Breestraat in Leiden in the old store of De Slegte. Collages and assemblages. 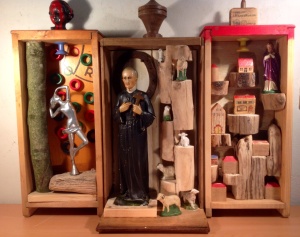 The last three assemblages lined up in my studio in Leidschendam-Schakenbosch.

Driftwood, sheep and a sheperd in a wooden box. 20x40cm. Inlay of an old door found near my house. Title stolen from Bettie Serveert. Little houses are antique toys made 100 years ago in the Erts Mountains in Germany. 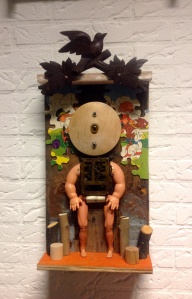 Pieces from an old clock, parts of fences, a jigsaw puzzle and a doll. Stayed in Leiden with Herbert.

Another oldie. Sold to Jolanda in March 2014. With a piece of a bridge from Park Cronesteyn in Leiden. Just 1 km from my house. 40x50cm.

Old work. Sold in the beginning of 2014 to Pim. 40x40cm. Old pictures found in France, postcard bought on a flea market in Leiden – De Kooi and picture from a young man as a sailor. Painted panel with a strange mixture of paints. Stamps made with a children set and black blockprint.